The Nationwide house price survey showing a drop of 0.9% following a 0.5% drop in July adds yet more weight to the growing view that house prices are sagging and are set to sag further.

The Halifax index peaked in March and fell monthly up to a minor rally in July. The Acadmetrics index has been heading south since March, although it similarly saw a gentle uplift of 0.1% in July. Hometrack went 0.1% negative in July and the drop hastened in August with a fall of 0.3%. And Rightmove, which measures asking prices, also went negative in July and remained negative in August.

Meanwhile, although the RICS measure of house price movements went negative in July for the first time for a year, its other data had been for some while strongly signalling a weakening market.

Against this we have the CLG and the Land Registry figures which have broadly remained positive, although the annual house price inflation rates have been easing.

The pile of evidence had become high enough for the highly-regarded Item Club this week to proclaim that the housing market is heading for a double dip.

And a forecast by Oxford Economics for the National Housing Federation (NHF) suggests a fall of 3% in house prices next year after a rise over the whole of this year of 7.5%.

But for me it is when you’re in a pub with mates and one looks at you, expecting a response, and says “I see the housing market is heading for a double dip” that it all becomes that much more real.

It would come across rude and smug to say that the evidence has been there for the past six months of so – best to say nothing and nod.

But the evidence has been there. When mortgage approvals dipped sharply in January, the fears or hopes (if you are a wannabe homebuyer) that prices might tumble started to gain traction. 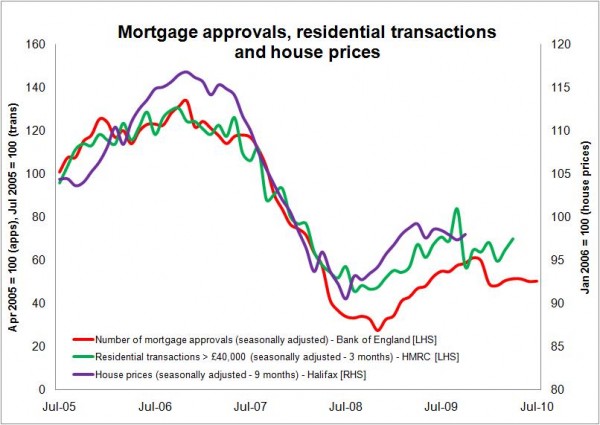 The graph, as some will recognise, has been intriguing me for some while. If you compare where the graph was in March with where it is now, the fears concerning some market watchers back then appear to have been reasonable.

So a softening of the market, a double dip, whatever you want to call it, but house prices are heading south. The big question is how near will they venture towards the Antarctic.

For a sharp drop, history suggests you need a trigger of some sort to spark a rapid rise in supply or a sharp drop in demand within the market. Unemployment would be one such trigger. We saw the effects of a mortgage famine. Rapidly rising mortgage rates might be another.

Of these the most likely near-term trigger would be unemployment.

The mortgage market is not likely to get that much tighter, being tight already. And, with a tsunamic effect on household incomes from the fiscal tightening in the pipeline, it is unlikely that we will see monetary tightening to any great degree for a while. That certainly seems to be the message from the Governor of the Bank of England, and he probably is as well placed as any to have a view.

But we are seeing a very different pattern of unemployment than we have in the past. The middle-class earner that epitomises the average mortgage holder, seems much more likely to be offered shorter time rather than a P45 this time around. So, while money may be tighter, there’s a lot more of it than would be on offer from the dole office.

This does seem to suggest that a flurry of forced sales resulting from a spate of redundancies is much less likely than in the past.

That said the fear of unemployment will be a dampener on demand, although whether sentiment will shift rapidly or gently will be a factor in determining the pace and severity of a change in the housing market. A gradual growth in concern over jobs might slow growth, but may not spark a price fall.

What we have seen over the past couple of years or so is that people under financial pressure just stay put – which they can do with mortgage rates at an historic low – and this constrains supply, which in turn helps to support prices.

So it may be that we do not see a rapid readjustment in prices in the near term – although one has to wonder what will happen when mortgage rates do revert to more normal levels.

More worrying is the possible impact of this cocktail of real and imagined concerns over unemployment and the fiscal tightening sweetened in part by low interest rates.

My concern is that it will lead to a further contraction in the level of housing transactions. This is not healthy for the housing market, the economy overall in terms of constrained labour mobility, or the Treasury as a result of a lower take on stamp duty.

If this pattern does plays out it may well hit house builders and the construction industry more widely, as fewer transactions in the market as a whole tends to imply fewer sales of new homes, even if builders are managing to hold their margins with firm pricing.

So it may well be that we see only a modest drop in prices, but are condemned to seeing far fewer new homes built.