As last week closed the Halifax index showed the average price of a home (seasonally adjusted) falling for the second month in a row. This contrasts starkly with the Nationwide data which earlier last week was showing a continuation of a minor surge in prices.

Meanwhile the Hometrack survey released last Monday suggests that house price inflation in flagging as activity in the market slows. 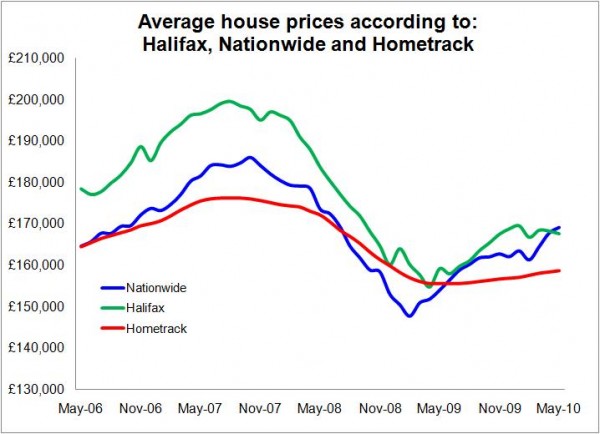 It is hard to know exactly what to make of these conflicting accounts and to assess what might or might not be happening broadly with sentiment in the housing market. Although there have certainly been significant factors – not least a General Election and a change of Government – that might well have queered any underlying trend.

But given that all the purveyors of house price indexes do their best to produce representative numbers the answer to why, for instance, Nationwide and Halifax should be showing contradictory directions probably lies in the mix of data they use and the weights they give each bit of data.

On the basis of this, the message I take from the conflicting messages is that the various sub-markets that make up the UK housing market as a whole may well be behaving very differently. So it is perhaps inappropriate to try to draw too many hard and fast conclusions about the market as a whole, or to dismiss any of the indexes as “wrong”.

For instance, I have been told by a number of near-addicted Rightmove followers that the activity in the market seems currently to be biased towards the top and the bottom of the local ranges. Homes aimed at the moderately well-off professional are not coming onto the market.

This anecdotal evidence is undoubtedly skewed by the circle of people I have talked to on the subject – moderately well-off professionals in the main – but there appears to be some sense in it.

It will not have taken today’s warning from the new Prime Minister David Cameron to convince many of those who might in more frenzied years have aspired to a “bigger home” to be more content to settle for what they have.

Meanwhile, the relatively low mortgage rates mean that even those formerly moderately well-off and now struggling professional types can stick with what they have rather than be forced to sell.

This all points to a lack of movement within the effective housing market and suggest a reduction in both supply and demand within what might be described in estate agent speak as the middle market.

This reduced liquidity in turn makes the matching of buyers and sellers harder which will probably lead to less predictable selling prices. And, given the existence of chains in the buying and selling process, this will affect the upper and lower market segments as well. So it’s no surprise to see the latest Bank of England figures showing mortgage lending still sluggish (see graph below).

There will of course be within the “middle market” plenty of people who have acquired equity and can buy fairly readily, so good homes will not remain on the market for that long and may be attracting a premium.

Not surprisingly this is the market that house builders are now increasingly fishing in, having in large part abandoned the urban first-time buyer and buy-to-let investor.

Naturally, as well as seeing different patterns within the market “vertically” we can also expect to see variation “horizontally”, or should I say geographically.

It doesn’t take a genius in public finances to work out that, in general, the North will suffer more from this recession than the South as the Government reshapes public spending. And the Midlands has already taken a beating on the jobs front.

Certainly for all the schadenfreude enjoyed by those outside London and the South east during the initial stages of the financial meltdown, the real pain of this recession is being and will increasingly be felt outside the “protected” financial sector of the economy.

Now here is a thought. To date this has not really been the “middle class” recession as some had eagerly suggested at the outset of the recession. The question, though, is whether, with savage cuts to the public sector, the weight of the recession will now shift to the better off.

When businesses cut jobs the tab in terms of benefits is picked up by the state, and when the public sector cuts job is again picks up the tab. There is an asymmetry here, despite the folksy “logic” that David Cameron trots out when drawing parallels between running Government and running a business.

What is the point of the Government cutting lowly paid jobs in the public sector if the result is to pick up a near equal tab in benefit payments and associated administration? Better, surely, that higher paid jobs go and real net savings are made.

So if the Government is “logical” expect more well paid than lowly paid jobs to go than we have seen in the recession in the private sector.

If this is the case and the numbers of more well off public servants forced into redundancy are significant, we might expect to see further differential movement in the sub-markets that make up the housing sector, although exactly how this might manifest itself is hard to predict.

We might also, then, expect to see more contradictory survey results from the purveyors of house price indexes. 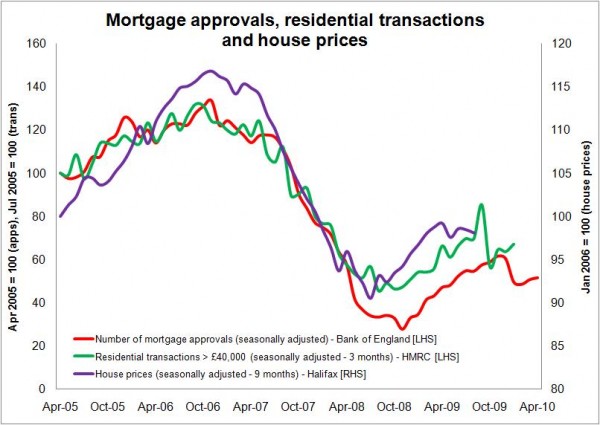 In the meantime here is an update to a graph I have used a couple of times before (click here to link to previous blog for explanation).

Any relationship between house prices and mortgage approvals as expressed in the form we have here will only hold in the shorter term, as we are metaphorically measuring apples and oranges.

But it interesting to note that, if we compare with the graph produced in March, the Halifax data is broadly following the path one might have expected.