As the latest round of monthly housing market indicators spills new insight into the pot of understanding the figures seem to support earlier suggestions that both activity and prices are stalling.

The pattern is varied regionally and confused by the General Election, pre-Budget anticipation over the increases in Capital Gains Tax for second home owners, the suspension of Home Improvement Packs and the ripples generated by the changes to stamp duty.

But the overall trend does now seems to suggest that the resurgence in the market that followed the sharp decline in 2008 is petering out.

Last week we had Rightmove figures pointing to a slackening in the rise in asking prices and so far this week we have had both the Hometrack and Nationwide surveys suggesting that prices rose by just 0.1% in June.

We also had the release last week of the Land Registry figures for May suggesting that house prices fell by 0.2%.

And a fortnight or so ago the figures produced by Acadametrics, used by the Financial Times, showed a continuation in May of the downward path in prices which started in March.

The Halifax index has also been on a downward path of late.

And commentators appear to be much of a like mind in suggesting that the upswing in the market is flagging.

Here’s a comment from Martin Gahbauer, Nationwide’s Chief Economist: “The month of June presented a picture of broad stability for the housing market.

And a comment from Richard Donnell, Director of Research at Hometrack: “Following strong market conditions over 2009, demand started to falter over the first quarter of 2010 – a trend that has continued with June seeing a modest 0.1% increase in new buyers.”

One key factor influencing the market is the shifting balance of buyers and sellers, a trend picked up by many recent surveys. According to Hometrack since March the supply has grown three times faster than demand.

But we have also seen other lead indicators looking depressed. The data on the number of mortgage approvals has remained suppressed after the surge at the end of last year, when many buyers were looking to cash in on partial suspension of Stamp Duty.

This effect also caused a spike in the number of homes bought and sold. And this market activity appears to have helped boost house prices late last year and into the early part of 2010.

However we now see both mortgage lending slumped and transactions slumping. The latest data from HMRC on transactions shows a seasonally adjusted figure for the number of transactions in the UK residential properties worth more than £40,000 dropped to 71,000 – about 10% down on the average over the previous six months.

And the latest data from the Bank of England released this week on lending shows the number of mortgages for house purchases remains suppressed. In the three months to the end of May the level of mortgage lending was down more than 10% on the level of the final six months of 2010. 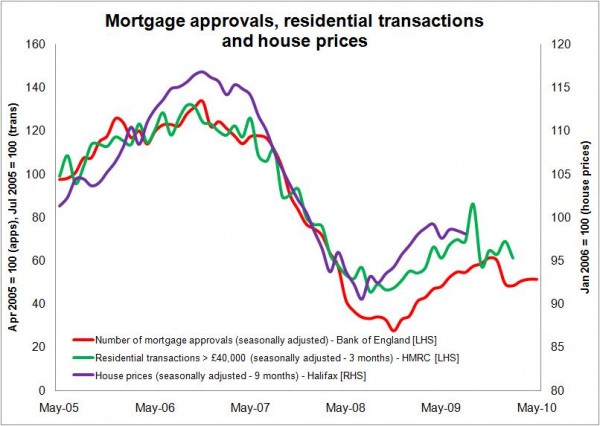 One graph that I have been updating with curiosity of late is one showing the Halifax monthly seasonally adjusted house price index against Bank of England mortgage lending and HMRC transactions, both lagged. Here is the latest incarnation.

It will be interesting to see where the Halifax puts its next cross on the graph when it reports its June figures next month.

For those that are curious here is what the graph looked like in March and we can see that so far the pattern has been broadly going in line with expectations.

It is too early, however, to suggest that we are on the verge of another downward slide in prices or whether this is a temporary pause an upward slope.

But for the industry the key concern is probably the number of eager buyers out there and that is once again looking a bit worrying.