As the real business of governing the UK begins to wind up again, the latest employment figures will do little to cheer the incoming government as it prepares to put chalk marks on where deep public sector cuts will be made.

The overall figures showed the rise of unemployment continuing above the 2.5 million mark. But equally as worrying is the swelling number of part-time workers that is hiding a bubble of underemployment.

Over the first quarter of this year the UK economy lost 103,000 full-time jobs and gained 27,000 part-time jobs. And the survey results show that most of these were taken reluctantly by those who would rather be workin 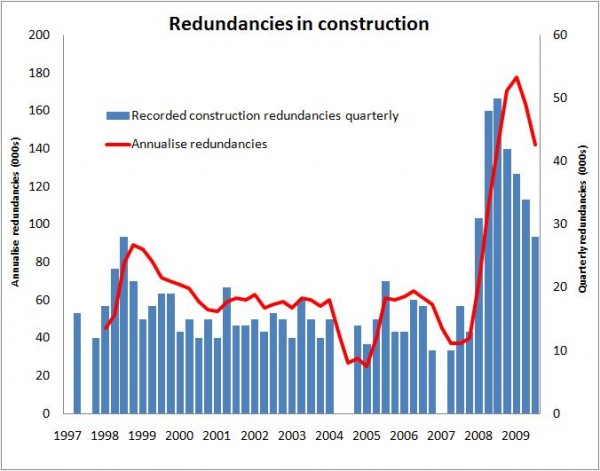 Fear of unemployment will play its part in determining the future path of the housing market and will very much determine whether the recent recovery experienced by the house builders is sustainable.

As for detail on construction jobs within the figures, the redundancies continue apace, albeit at a slower pace that in recent quarters.

28,000 redundancies were recorded in the sector over the first quarter. The lowest level for a year and a half, but still high by historic standards and disturbing in the light of the low levels of vacancies recorded.

The two graphs to the right  rather tell the story.

Meanwhile, for all the heat generated by the loss of British jobs to foreign workers, it is worth reflecting on the fact that unemployment would be worse for UK residents had not the pace of job losses among non-UK residents been faster.

This should provide some relief to house builders when considering the nuances within the employment data.

Employment among non-UK residents dropped 4% in the year to March 2010 against a fall of 0.9% among UK residents.

And the loss of jobs among non-UK residents would have topped 5% had there not been a surge of 27,000 more US citizens working in the UK than a year earlier. This presumably reflects the rapid recovery in City jobs.

As for the future path of employment within the UK, we very much have to wait and see how the policies of the new coalition government unfold and how fast we see public sector jobs sink and, in relation to construction, how deep the axe sinks into the capital budget.